Enjoys in the deepest canyons of earth, the Colca canyon and the Cotahuasi canyons are both located in Arequipa Perú. Enjoy the white water rafting adventure at the Colca and Cotahuasi rivers. Make your own Peru rafting trip. Come to Perú.
Publicado por Colca Canyon en 9:47 No hay comentarios: 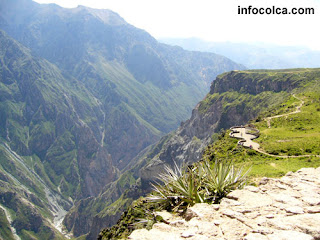 The Colca river begins high in the Andes, at Condorama Crucero Alto, drops down to the Pacific in stages, changing its name to Majes and then Camana as it goes. Where it runs between the tiny mountain villages of Chivay to Cabanaconde is a deep canyon known as the Colca Canyon.


This canyon is reportedly the deepest in the world, thought to be twice as deep as the Grand Canyon in the USA. Unlike most of the Grand Canyon, portions of the Colca canyon are habitable, with pre-Colombian terraced fields still supporting agriculture and human life. Click on this photo from Peru - Colca Canyon - Condor Pass, Part 2, Andrys Basten's Trip to Peru, for a very large photo which shows in wonderful detail how every bit of land is put to use. Then click to Part I and read her full account of her trip with more photos.

What brings increasingly more visitors each year, in addition to the awesome sights, are the Andean condors. The condor population of South America is unfortunately dwindling, but here in Colca Canyon, visitors can see them at fairly close range as they float on the rising thermals and scan for carrion far below them, as these photos of condors in flight demonstrate.

The river and valley were well-known to the Incas and their predecessors, and the Spaniards laid out townships along the valley, no doubt planning to use Rio Colca valley as the route to Cuzco and other Andean locations. They built churches along the way, notably the one at Coporaque, but for some reason, the towns never grew and the route faded from outside memory.

It wasn't until the early 1930's that the Colca valley was explored again, this time for the American Geographical Society. Colca Valley has been known by different names: The Lost Valley of the Incas, The Valley of Wonders, The Valley of Fire and The Territory of the Condor. It has even been called one of the Seven Natural Wonders of the World."
Publicado por Colca Canyon en 14:15 No hay comentarios: